I spoke with Tony Croasdale on the Urban Wildlife Podcast about Rose-ringed Parakeets and other birds of Bangalore.

Catch the podcast at http://www.urbanwildlifecast.com/?p=205

Apart from birds, the Urban Wildlife Podcast covers  whales, trees, coyotes, snakes, and other critters. Do listen in and follow them at https://www.facebook.com/UrbanWildlifePodcast/

I went to watch the newly released Jungle Book movie yesterday. While it was a great movie; good direction, great action and beautiful scenery, I couldn't help noticing the animals and birds in the background.

In doing so, I actually noticed that there were quite a few mistakes with the movie. While Kipling's book's location is clearly stated and sticks to a forest on the banks of the Wainganga river, the fauna seem to tell a different tale in the movie. There is a lot of regional overlapping with the species.

We see flying squirrels many times throughout the movie. These are visually similar to the Indian Giant Squirrels or Malabar Giant Squirrels found in the south-western parts of India, from Kerala up to the Satpura range in Maharashtra.

Rhinos are also often seen throughout the movie. The Indian One-Horned Rhino is native to 11 sites in north-eastern India and Nepal, and was once found throughout the Indo-Gangetic plain.

Just after the rhinos, we see a herd of Nilgai, or Blue Bull. These are Indian antelopes. They are native to the Terai region, the marshy lands near to the Nepal border.

Kaa comes into the movie as a hungry Reticulated Python voiced by Scarlett Johansson. Just before Mowgli is saved, we see him hypnotized in Kaa's coils, Kaa's mouth reaching out to bite him... Hold it right there. Kaa is a Reticulated Python, and kills by asphyxiation through constriction, not biting prey. Kaa would not bite Mowgli until he was already dead. The Reticulated Python has a nationwide distribution.

Mowgli comes across some delicious fruit, and sits down to eat it. He then meets a clever group of 3 Nilgiri Martens. Although they visually are similar to the Pine Marten of Europe, we can assume it is a Nilgiri Marten because of the movie being set in India. That is found in the Nilgiri hills of South-Western India.

After Shere Khan has taken over the wolf rock, we see some CinereousVultures sitting with him on the hill. These are found in North-western India and Pakistan, with scattered records all over north India.

The scene where Mowgli is kidnapped by the BandarLog presents a myriad of such issues. There are Hanuman Langurs, Nilgiri Langurs, Lion-tailed Macaques (all native to South India) and Hoolock Gibbons (native to Assam and Arunachal Pradesh in North-east). There is also the ubiquitous Bonnet Macaque, the common 'monkey' found all over India.

Baloo, said to be a Sloth Bear, is found in South India. 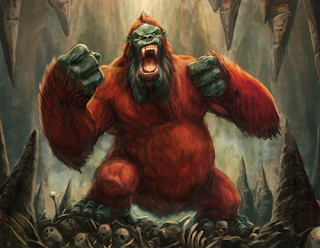 That's about all the range map overlap that's there. Then there are some behavioural issues.

The Beater is my name for the Bee-eater; it suits its habit of bashing insects with stings before killing them. These seem to be fairly common in the jungle, but their depiction has a few problems.

At the watering hole, we can see beaters sitting inside the mouth of a Marsh Crocodile. This is the behaviour performed by oxpeckers in India and Cattle Egrets and Drongos here (see Tractor Egrets and Cattle Drongos) Beaters display no such behaviour.

While Shere Khan talks about brood parasitism of the cuckoo, it shows a picture of the cuckoo's youngling being fed by a bee-eater. This bee-eater has no such connections, the cuckoo usually does it in a crow's nest.

While the landscape is beautiful, there is some lack of connections in different terrains. In a small area, you have plains, a rocky area, dense broadleaved forest, young leafed forests, and the hills in the background. It's not possible to have so many kinds of terrains in such a small area.

While staying with Baloo and Bagheera, Mowgli sneaks out to save the baby elephant from a pit. Bagheera is seen as peacefully sleeping at night while Mowgli runs out. Two problems with this specific scene.
(1) Bagheera is a black panther. Black Panthers are nocturnal.
(2) Black Panthers are among the most alert creatures in the world. Either Mowgli was so quiet that he made virtually no noise at all (unlikely), or this is not possible (way more likely).

5. The Names
While many characters stay true to Rudyard Kipling's naming, like Kaa (the python), Ikki (the porcupine) and Mowgli, Shere Khan, Bagheera and Baloo, there are some unlikely names that pop up.

King Louie. Really; an Indian monkey named Louie? I figured that Jon Favreau must have wanted to pay homage to Disney's "Jungle VIP" in their more lackadaisical animation, but in a serious movie like this one, a name like Louie is completely inappropriate.

And then there's the one unaccounted for: a pygmy hog named Fred. Really?

However, despite all these bungles in the jungles that are visible only to the eye of a naturalist, the movie turned out great; it stayed true to its roots while bringing in new elements and inculcating a love for nature in the minds of today's generation.
Posted by Krishna S. Girish at 10:02 PM 2 comments: