On the Quest for the Booted Warbler: A narrative in 3 Days

After birding at the lake, I was returning home on my cycle when I heard a squirrel making loud sounds, being chased by a Black Kite. I went to see, and the squirrel saved itself and scurried into a hollow in a Cassia tree.

As I saw this, I heard a dull buzzing in a flower-bearing bush nearby. I went to investigate, and sure enough, soon saw a small bird hopping about quirkily, never staying for more than a second on a branch. I made a soft 'chik' noise, and it (sort of) came out to investigate. I saw a dull brown colour, and a visible 'eyebrow'. I immediately recognized it as a Booted Warbler! This was a miracle: it is summer in India now, and this warbler should have left here in February and went to North-western India and Pakistan. But for some reason, it decided to stick around and enjoy the weather. I rushed home and went to get my camera. I dashed back (with my pet stray dog Bruno and his mate Sky following against my wishes) to the spot and began to aim the camera.

I nearly got it many times: it was just a tad too fast for me. Then, disaster struck, kind of. Bruno and Sky began to parade through the bushes, and now there was no hope for finding it. I gave up.

Today, we went in the evening with our sole aim to photograph it. I stood there a while, rooted to the spot, saw it a few times, and it ultimately disappeared. I gave up.

Today, we went at 10 in the morning, this time without Sky and Bruno and with my dad. The photo was taken rapidly, and an endeavour lasting for 3 days had finally ended. 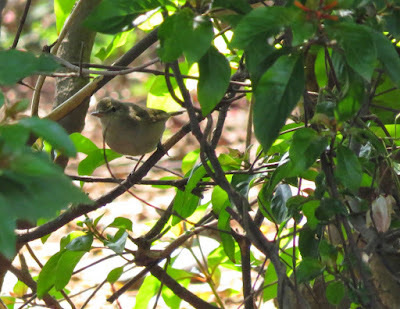